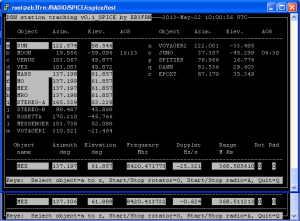 As I was write in my last post, one of the challenges of the amateur-DSN stations is get the ephemeris of the space probes to get the position and deldot for the doppler. JPL Horizons helps, but dont give info about the planetary space probes. How solve it? The solution is use the same data and tools that are using the mission control 😉 Every mission, have a dataset called kernel that contains info about position, instruments and clock onboard, mission operations, etc… this data is public and is controlled by NASA / NAIF and can be obtenied from here. 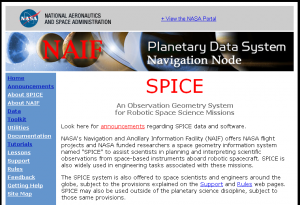 The Nasa NAIF, proces a toolkit called SPICE  to use this data. This toolkit is available in a lot of programming languages and have a good documentation. Using a small piece of code from Achim Vollhardt DH2VA that he was send-me in 2006 and after some years googling a lot, finally I build my own planetary probes ephemeris generator. 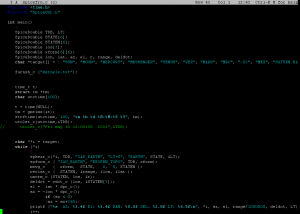